Blog - Latest News
You are here: Home1 / General Interest2 / We Settle the Debate of Chocolate vs Vanilla Ice Cream 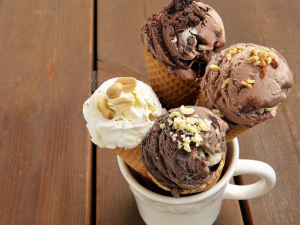 This summer has been hot across the U.S. – VERY hot. While there are many ways to cool down, few provide ultimate satisfaction and happiness like a big bowl of ice cream.

But not just any ice cream will do. The flavor of the ice cream is critical. Some insist on one of the many designer flavors developed over recent years (avocado bacon anyone?), but traditionalists will only eat chocolate, vanilla or sometimes strawberry ice cream to temper hot temperatures.

In this In The Mix blog, we scooped up health, environmental and consumer data to see if it answers the decades old debate over which ice cream flavor is the best – chocolate or vanilla.

Chocolate vs Vanilla Ice Cream – Which is the Healthier Option?

We should start by saying ice cream in general isn’t very healthy. It includes a significant amount of saturated fat and sugar. It can also create problems for those that are lactose intolerant.

Still, there can be some modest benefits to eating chocolate and vanilla ice cream. For chocolate ice cream lovers, choose a variety that is high in cacao (70%+, includes antioxidants) and low in sugar (more of an indirect benefit). Examples are dark and bittersweet chocolate. Avoid ice cream made with milk chocolate, white chocolate and specialty chocolates. They are typically the highest in fat, sugar and calories.

Vanilla ice cream also has very limited health benefits. Because vanilla flavor is highly concentrated in the bean, most vanilla ice cream only uses a small amount. That said, vanilla does have some antioxidants (like dark chocolate), and it can reduce the need for sugar in ice cream and other recipes due to its natural sweetness (again, more of an indirect benefit).

In the end, we’ll give chocolate ice cream the slight edge over its vanilla counterpart as the healthier option. Perhaps a better way to say this is it’s not as bad for you – assuming you are consuming the same portion of each, and it’s dark chocolate, and so on.

Is Chocolate or Vanilla Production Better for the Environment?

Chocolate is derived from the seeds of the cacao tree. Vanilla is the fruit of an orchid plant. Both plants grow in warm, tropical climates near the equator.

Cocoa (chocolate) production and vanilla production are not good for the environment (healable.com). Both require high amounts of labor, land and water to grow/process. Most of the land was previously thick forest. Deforestation reduces biodiversity and increases greenhouse gas emissions. Vanilla production also requires hand pollination of every flower (except in Mexico where Melipona bees do the work).

Countless polls have asked American consumers over the years which ice cream flavor they prefer the most. Here are some of the results:

The poll results consistently show chocolate is the favorite ice cream flavor of Americans but only by a slight margin in most cases. A few outlier surveys showed a bigger gap between chocolate and vanilla or had vanilla as the favorite.

Like the general population, ProQuip team members do not have a strong preference for chocolate or vanilla ice cream.

The Debate is Over

Based on the above information, it’s obvious the debate is over when it comes to whether chocolate or vanilla ice cream is better. The answer is neither. There simply isn’t much of a difference between the two when considering health benefits (or lack of), environmental impact and consumer preference.

Despite these findings, the chocolate vs vanilla ice cream debate will likely rage on for decades to come – and the outcome will likely be the same. Unless some yet to be invented new designer flavor displaces them both.

ProQuip tank agitators are used in the production of ice cream and other food products. For more information on ProQuip mixing solutions, email applications@proquipinc.com or call us at 330-468-1850.

Will Green Ammonia Power Your Future Car Instead of Batteries?
Scroll to top