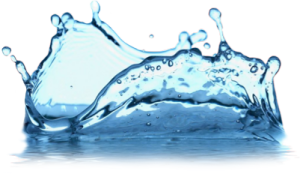 If your viscosity value for the material you want to mix is incorrect, you will procure an industrial mixer with the wrong specifications for your process. When this occurs, the industrial mixer will do too much or too little for your mixing requirements – both of which will cost you extra money!

At ProQuip, we have tested the viscosity of liquids submitted to us described to be “like motor oil” and found viscosity values from 10 centipoises (cps) to above 30,000 cps! Motor oil (say SAE 30 at room temperature) actually 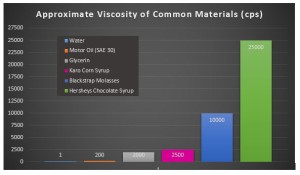 has a viscosity of about 150 cps. When viscosity is measured for really thick liquids, molasses for example, the disparity between perceived and actual viscosity is even worse.

A simple example illustrates what can happen if the reported viscosity is wrong for the material you are mixing. Let’s say your industrial mixer has a 36 inch standard Hi Flow impeller at 100 RPM that requires about 1 HP at 10 cps (and slightly more at 150 cps). An industrial mixer with these specs (e.g., the ProQuip J Series Industrial Mixer) is suitable for mixing materials such as water, anti-freeze and maple syrup (see Figure 1). However, if the material you are mixing has a viscosity of 20,000-30,000 cps (the viscosity of chocolate syrup), your industrial mixer requires more than 7 HP. 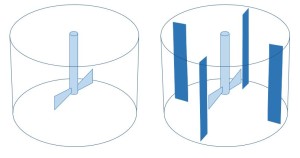 The Effect of Material Viscosity on Mixing Vessel Design

With high viscosity materials, baffles can impede the flow of the liquid, preventing thorough mixing in the vessel.  In these cases, the tank is usually unbaffled and special impeller designs are used to provide top to bottom flow.

The Effect of Material Viscosity on Mixing Time 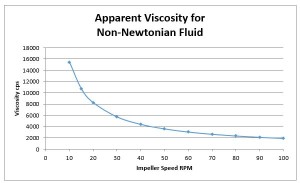 The Effect of non-Newtonian Liquids on Industrial Mixer Performance

When determining your industrial mixer requirements, it is important to know if the liquids you are mixing are non-Newtonian. Non-Newtonian liquids are typically “thick” and do not have a fixed viscosity value in centipoises. Instead, non-Newtonian liquids have an “apparent viscosity” that almost always goes down in value as they are mixed faster. To determine the industrial mixer requirements for a non-Newtonian fluid, you need at least three viscosity measurements at different “shear rates” (i.e., stirring speeds; See Figure 3).

How do you know if the liquid you are mixing is non-Newtonian? Simple visual observation is usually a fairly reliable method. When mixing a non-Newtonian liquid, an improperly designed mixing impeller can “cut a hole in the batch.” The liquid moves vigorously around the mixing impeller but is “dead” farther out in the tank. Under these circumstances, several factors influence agitator design including impeller geometry, size and speed. Common non-Newtonian liquids include polymers, adhesives, and high solids slurries.

If you are unsure of the viscosity of the material you are mixing, reference our viscosity conversion chart. If your material is not listed or you are unsure how viscosity affects your industrial mixer requirements (for current or new applications), contact ProQuip for additional information on our free viscosity testing and instructions on shipping material samples.