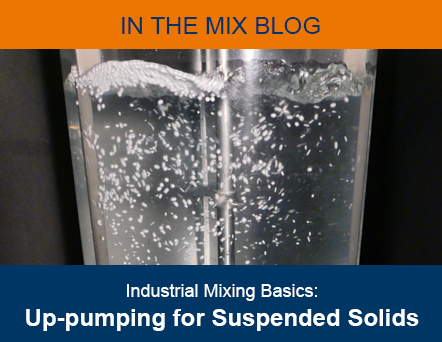 Suspended solids in mixing applications fall into one of two categories: sinking or floating. This In The Mix blog includes several videos demonstrating the effect of up-pumping and down-dumping on sinking and floating solids with ProQuip HiFlow Hydrofoil Impellers.

Solids suspension applications for mixed tanks usually pertain to systems in which solids would settle to the bottom of the tank if no agitation is provided.  The first video below is an example of down-pumping for suspension of sinking solids.  This shows a baffled lab scale tank with center mounted down-pumping ProQuip HiFlow hydrofoil impellers. The agitator speed was selected for complete suspension.

Solids suspension can also refer to applications for mixed tanks where the solids will tend to float if not agitated.   It is often assumed, that in order to draw down floating solids, development of a surface vortex is required.  This can be accomplished with a down-pumping impeller positioned close to the liquid surface.  This configuration, however, can result in significant air entrainment into the fluid which may not be desirable.

An alternate solution to suspend floating solid is use an impeller system configured for up-pumping.

This video blog demonstrates the advantages of using an up-pumping HiFlow impeller for draw down of floating solids.

The final suspended solids video shows the same baffled lab scale tank and center-mounted agitator.  The two equally spaced Hi-Flow impellers are now mounted for up-pumping.  The same floating foam particles are added to the tank, and the agitator is run at the same speed as the previous video. In this configuration, the floating particles are now drawn down into the liquid. The up-pumping impeller creates a circulation loop going from the center of the tank with the solids drawn down towards the tank baffles. This also results in minimal air entrainment into the fluid. ProQuip’s Hi-Flow impeller is very effective when configured for up-pumping  since it produces a flow pattern primarily in the axial direction.

Examples of mixing applications that can benefit from up-pumping Hi-Flow impellers include:

For more information on ProQuip mixing solutions for suspended solids applications, email applications@proquipinc.com or call us at 330-468-1850.

Standard or Synthetic Oil, That is the Question

The Science of Golf Balls
Scroll to top