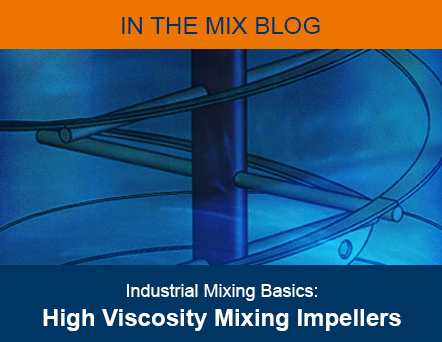 This is the fourth blog in our Industrial Mixing Basics series on mixing impellers. It focuses on high viscosity mixing impellers (i.e., laminar flow impellers). These include the double helix impellers and ProQuip Doubly-Pitched HiFlow™ impeller.

Blending high viscosity fluids generally requires a mixing impeller that operates effectively in a high viscosity/laminar flow regime.  Laminar flow is a fluid flow characterized by long, smooth flow currents, mainly in the same direction as the bulk of the flow with little interaction between them.  In a mixing system, these fluids have a calculated Reynolds number less than 2000 (Reference: Industrial Mixing Basics: What is Reynolds Number?). Typical laminar flow impellers include anchor impellers, gate impellers and double-helix impellers. 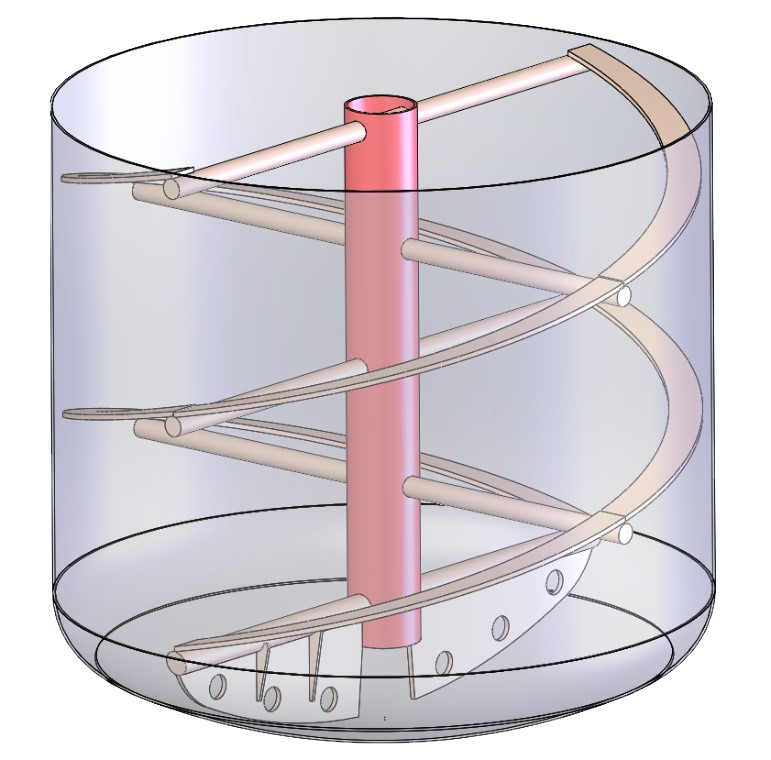 A double-helix impeller is commonly used to blend high viscosity fluids operating in a laminar flow regime.  The helical ribbons in this impeller are designed for close wall clearance.  They operate at relatively slow speeds rotating in a direction to create fluid movement up along the wall.  The fluid returns down the center of the tank providing overall blending in the tank.  There are many high viscosity polymer applications mixed with helix impellers with viscosities exceeding 500,000 cps.

The following video demonstrates the action of a high viscosity fluid with a double helix impeller.  This is a 13.25” diameter vessel with a 12.5” diameter double helix impeller.  The fluid viscosity is 10,000 cps.  The helix is operating in a laminar flow regime.  A colored dye is added to allow visualization of the blending with fluid flow up along the walls and down the center.  The blend time for this high viscosity fluid is relatively short.

The ProQuip Doubly-Pitched HiFlow impeller can be used in select high viscosity applications as an alternative to a double-helix impeller design. 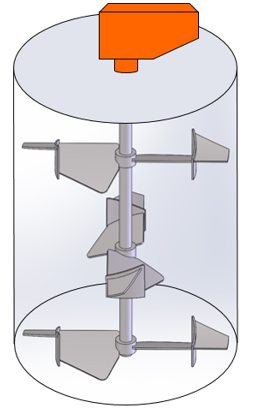 The ProQuip Doubly-Pitched HiFlow impeller pumps in both directions and induces a vigorous top-to-bottom turnover of a vessel in a typical three impeller configuration without baffles.  Water-like material circulates without excessive swirling. As viscosity increases, in applications like glue/adhesive manufacturing, top-to-bottom circulation is still maintained because the large diameter Double-Pitched HiFlow impeller creates a mixing zone essentially across the mixing tank diameter. This means viscous material cannot bypass the mixing zone because the entire diameter of the vessel is swept by the impeller. The Doubly-Pitched HiFlow impeller provides excellent agitation in the transition zone (Reynolds numbers in the range of 10-10,000) without requiring tank baffles.

The proprietary design of the ProQuip Doubly-Pitched HiFlow impeller results in a very low power demand. This makes it possible to use relatively large impellers without requiring excessive horsepower.

The following video demonstrates the mixing of the same high viscosity fluid used in the double-helix impeller video.  The lab scale vessel is 13.25” diameter with three 12” diameter ProQuip Doubly-Pitched HiFlow impellers.  The fluid viscosity is 10,000 cps.

For more information about high viscosity mixing impellers, email applications@proquipinc.com or call us at 330-468-1850. Other Industrial Mixing Basics blogs in our mixing impeller series include:

How Toothpaste is Made

This site uses cookies. By continuing to browse the site, you are agreeing to our use of cookies.

We may request cookies to be set on your device. We use cookies to let us know when you visit our websites, how you interact with us, to enrich your user experience, and to customize your relationship with our website.

Click on the different category headings to find out more. You can also change some of your preferences. Note that blocking some types of cookies may impact your experience on our websites and the services we are able to offer.

These cookies are strictly necessary to provide you with services available through our website and to use some of its features.

Because these cookies are strictly necessary to deliver the website, refuseing them will have impact how our site functions. You always can block or delete cookies by changing your browser settings and force blocking all cookies on this website. But this will always prompt you to accept/refuse cookies when revisiting our site.

We fully respect if you want to refuse cookies but to avoid asking you again and again kindly allow us to store a cookie for that. You are free to opt out any time or opt in for other cookies to get a better experience. If you refuse cookies we will remove all set cookies in our domain.

We provide you with a list of stored cookies on your computer in our domain so you can check what we stored. Due to security reasons we are not able to show or modify cookies from other domains. You can check these in your browser security settings.

These cookies collect information that is used either in aggregate form to help us understand how our website is being used or how effective our marketing campaigns are, or to help us customize our website and application for you in order to enhance your experience.

If you do not want that we track your visit to our site you can disable tracking in your browser here:

We also use different external services like Google Webfonts, Google Maps, and external Video providers. Since these providers may collect personal data like your IP address we allow you to block them here. Please be aware that this might heavily reduce the functionality and appearance of our site. Changes will take effect once you reload the page.

The following cookies are also needed - You can choose if you want to allow them: