And the Production Process Used to Make Fuel Grade Ethanol 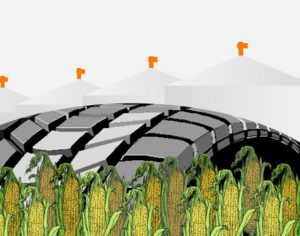 We hope you enjoyed our last blog post on flavored bourbons and the mixing  process used to make them. We also hope you were able to try a few of the cocktail recipes using flavored bourbons and maybe even won a few dollars on the Kentucky Derby. Thanks to Brian Abraham, ProQuip sales manager, for suggesting the blog topic. It was a different and more  informal approach to the way we typically write our blog posts.

The topic of this blog also follows this approach. With summer travel season right around the corner, it includes five favorite family road trips in the U.S. Summer driving vacations remain extremely popular, because fuel is relatively cheap (especially in the U.S) and airline travel is increasingly time consuming and inconvenient (multiple connections, long security lines and overcrowded planes are now the norm).

Like our previous blog post,  I also provide an overview of a related mixing process. In this case, we look at the process for making ethanol, which is often a component of the gasoline used on road trips. Proquip is one of the leading suppliers of industrial tank agitators and mixing solutions to the ethanol industry. More than 100 ethanol plants the United States, Canada, Europe and South America, which produce over 7 billion gallons of ethanol annually, use ProQuip agitators.

This road trip destination is about 90 minutes from Cleveland (and ProQuip headquarters, which is located south of Cleveland) along the shores of Lake Erie. Sandusky makes our list not because of the city itself but because of its most famous attraction: Cedar Point Amusement Park.

Cedar Point not only occupies one of the most prime pieces of real estate along Lake Erie, it is home to over 70 rides and 18 roller coasters. It consistently ranks as one of the top amusement parks in the world. Many of the roller coasters are currently or were once world record holders for tallest, fastest, etc. Almost all offer breathtaking views of Lake Erie during the ride, including the new Valravn, the tallest, fastest & longest dive coaster in the world.

If you love roller coasters, you absolutely must go to Cedar Point. And for the best experience, stay on-site at Hotel Breakers, which recently underwent a $50 million renovation. Opened in 1905, it sits next to one of the widest and best beaches anywhere on the Great Lakes complete with beach volleyball and various water sports. 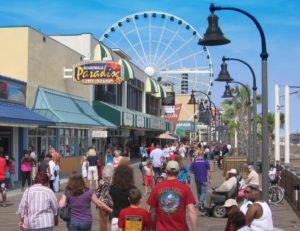 Like Cedar Point, Myrtle Beach, South Carolina is known for its beach. The big difference is length. Cedar Point’s beach is roughly a mile in length. The Myrtle Beach area has over 60 miles of beach along the Atlantic coast, giving it the designation “The Grand Strand and making it a favorite for summer road trips.

In addition to its lengthy beach, Myrtle Beach has just about everything else one can want for summer fun: golf (over 100 courses), miniature golf, water parks, deep sea fishing, water sports, shows, concerts, shopping, restaurants (especially seafood), museums, Family Kingdom Amusement Park, hotels, condos, campgrounds and a new $6 million boardwalk. You will never run out of things to do in Myrtle Beach!

If you do happen to get bored (which I doubt), the surrounding area also offers plenty of things to do. To the south, head to the Pawley’s Island area about 25 miles away where you won’t encounter as many crowds, and you can see the shrimp boats come and go. Farther south is Charleston (about an hour from Myrtle Beach), a quintessential Southern town loaded with stately old houses and Civil War history (I recommend a walking tour). 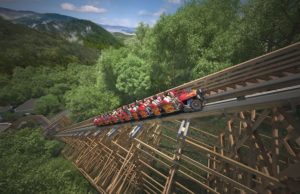 Pigeon Forge is often called the Myrtle Beach of the Smokies. It offers many of the same fun activities as its larger cousin to the south (but features mountains instead of beaches) and is very popular for family road trips.

If you like staying in log cabins, Pigeon Forge is the place for you. They dot the surrounding mountain sides like wild mushrooms. Most cabins have been built in the last two decades and have all the modern amenities like cable/satellite TV, hot tubs and luxury baths. A wide variety of sizes are available to rent from one bedroom to a dozen (some are so large they look more like a lodge than a cabin). Rental prices are reasonable.

One of Pigeon Forge’s top attractions is Dollywood. Built by country music legend Dolly Parton, the amusement park features over 40 rides (including several top notch roller coasters like the new Lightning Rod, the world’s fastest wooden coaster), live entertainment, and even a Dolly Parton museum. Dollywood can’t match Cedar Point for the number of rides and coasters, but its mountain setting and small town charm are well worth the visit. Tripadvisor thinks so, too. It is the recipient of their 2015 Travelers’ Choice Award.

Smugglers’ Notch is also a mountain destination, but snow skiing is typically its biggest attraction. Located in Northern New England about an hour from Burlington, Vermont, it is the lesser known neighbor of Stowe.

Snow is plentiful in Smugglers Notch and sometimes remains on the ground until early June. To avoid any wintry weather, its best to plan summer road trips to the area in July or August.

Despite being a ski resort, Smugglers Notch offers a wide variety of summer activities – especially for families. Day camps are available for children of all ages, allowing parents to hike mountain trails, swim in one of eight pools, or climb rock walls. Off-site adult activities include canoeing, golf, winery tours, fishing, horse back riding and biking. Children can partake in many of the same activities, either while at camp or during free time. 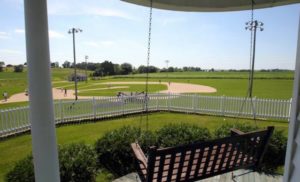 If you build it, they will come. And come and come and come. Dyersville is home to the corn field turned baseball field featured in the movie Field of Dreams. Nearly 30 years after the movie was released, the Field of Dreams movie site remains a popular destination of summer road trips – especially for fathers and sons. Visitors often describe the experience as magical, and something you just want to let soak in.

Dyersville is located in the eastern end of Iowa about a half hour west of Dubuque. Two of the greatest baseball cities in the U.S. are located within a five hour drive – Chicago and St.Louis. A great itinerary for a trip to Dyersville includes stops at Wrigley Field for a Cubs game and Busch Stadium for a Cardinals game.

The Field of Dreams site is free, and the field looks very similar to the way it did in the film.  Visitors have full access to the field. You can walk out of the corn and even play a game (bring your gloves and bats). Although there are limited attractions at the site other than the field (the house is not open, the owners still live in it), plan to stay a good part of the day. If you’re at the site on Sunday, try to catch the ghost game featuring “older” players in period uniforms.

Corn fields in Iowa aren’t a big deal just because of Field of Dreams. Iowa grows the most corn of any state in the U.S., and roughly three times the amount of Mexico. Iowa also produces the most ethanol, which is typically made from corn, of any state by a significant margin (nearly twice as much as the next biggest producer, Nebraska).

Source: Renewable Fuels Association, How Ethanol is Made

Common Mixing Parameters for The Fermentation Process in Ethanol Production

Despite low fuel costs in many countries, many families making road trips still look for ways to reduce their fuel consumption. Fewer dollars spent at the pump leaves more money for ice cream, souvenirs, t-shirts, etc. Here are some of the most common tips for saving fuel:

Other tips for maximizing fuel economy on summer road trips include driving at speeds lower than 55 mph, avoiding carriers and other objects on the roof, removing unnecessary weight, and driving a smaller, more fuel efficient car.

For more information about optimizing your summer road trip, visit major travel sites including the U.S. Department of Energy, AAA and Travelocity. For help with industrial tank agitators or your mixing application, email applications@proquipinc.com or call us at 330-468-1850.

Are You Using the Right Tank Design for Your Industrial Mixing Application? (Part 3 – Emulsification, Gas Dispersion and Absorption, Crystallization and Heat Transfer)

Are You Using the Right Tank Design for Your Industrial Mixing Application? (Part 2 – Dispersion & Dissolution)